Although olfactory perception is one of the key elements of social determination in close proximity, the function of olfactory signalling in social mammalian species is little understood. Many mammal species possess functional vomeronasal organs, well-developed scent glands and show scent-marking behaviour (Scordato and Dea 2007). Recent literature has been published on the function of the vomeronasal system in man (Stockhorst and Pietrowski 2004), primates (Borcherding and Wöhrmann-Repenning 2007) and mice (Boehm 2006), as well as on social recognition through olfactory perception in Belding´s ground squirrels (Mateo 2006) and chickens (Poter et al. 2005). Research on the equids´ olfactory social recognition will provide valuable information about ecological and evolutionary constraints, because of the equids existence in different evolutionary stages (See "Integration Project" above). Equids possess a prominent vomeronasal organ (Kumar et al. 2002). However research on horses´ olfactory perception has exclusively been undertaken in stallions (Marinier et al. 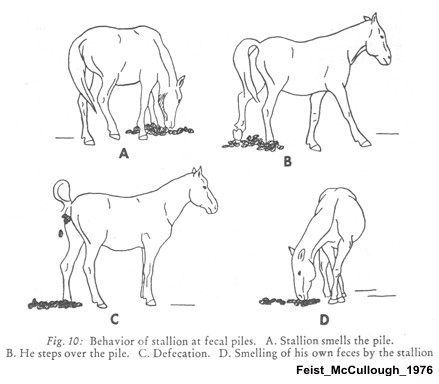 1988, Rubenstein and Hack 1992, Stahlbaum and Houpt 1988, Weeks et al. 2002, Saslow 2002). This might be due to the stallions´ obvious marking behaviour and "Flehmen" response to olfactory cues. Rubenstein and Hack (1992) also recorded numerous agonistic encounters between stallions after initial approach and sniffing at each other. However, in general, social groups in equids are composed of several mares, their offspring and usually one, and in some cases up to five stallions. We have come up with the hypothesis that social recognition through olfactory perception is equally important and possible to prove in both sexes. This hypothesis is supported by the findings of Weeks et al. (2002), which state that Flehmen responses to olfactory cues can be observed in male and female foals throughout their pre-pubertal period.

We conducted an initial test series in which we confronted male and female horses (signal receivers) with a series of choice tests between faecal odours derived from conspecific donors (signal senders) of varying sex, age, social status and social affiliation. Preliminary results suggest that horses determine the donor's sex and the affiliation to a certain social group. Horses preferred the odours of donors from the same sex, which is consistent with findings in stallions (Stahlbaum and Houpt 1988) and in monkeys (Scordato and Dea 2007). Scent marks appear to be critical to competition between the sexes and, therefore, may be subject to sexual selection (Stahlbaum and Houpt 1988, Scordato and Dea 2007). From the first preliminary data we obtained on the reaction of horses to faeces from donors of the same group we bring up the unconventional novel hypothesis that factors other than rank, age or sex of the donor are decisive, since members of social groups appear to prefer certain smells no matter what the donors rank, age or sex might be. Certain personalities or social positions of the donors might result in specific secretion of pheromones, coticosteroids or other hormone-metabolites which might enhance the interest of other group members. This hypothesis is supported by the fact that the quantity of excreted cortisol and cortisol-metabolites in faeces varies after stressful situations (Keay et al. 2006, Palme 2005). The substantiation of the novel hypothesis will be the main focus of this research project for the coming years overlapping with research in personalities and social positions of horses (see "Investigation Behaviour Project").